From bland to beautiful – how design can produce a winning slide

When producing presentations, more often than not, I am taking a slide deck that someone has already created and transforming it into something that is far more effective and compelling.

Recently I worked on a presentation for a company that was launching an IPO. There were several slides in the presentation, but I want to show you just one and how I changed it from a very plain and busy slide into a set of slides that really worked the way the client wanted.

This is the slide I was sent:

As the presentation was confidential, all names, job descriptions, photos and the logo have been changed but it terms of design and layout, this was exactly how it looked. (Incidentally, the new names were generated online using an online random name generator. I wasn’t sure about Hale Stone and Topsy Cornett so I went for some that were a bit more sensible!)

As well as not working the way that the client wanted, there were several other issues with this slide:

In the briefing conversation I had with the client to go through all the slides, the idea behind this team slide was that they could focus on each individual as required. They didn’t want it to be linear but more interactive so that they could go into the details of any of the team as requested by the backers to whom they were presenting.

What I came up with was a set of slides, one for each member of the team and an overall slide containing all six members, as shown below. As you can see, the overall slide just contains the pictures, name and job title. This means that the pictures can be used much larger than in the original. 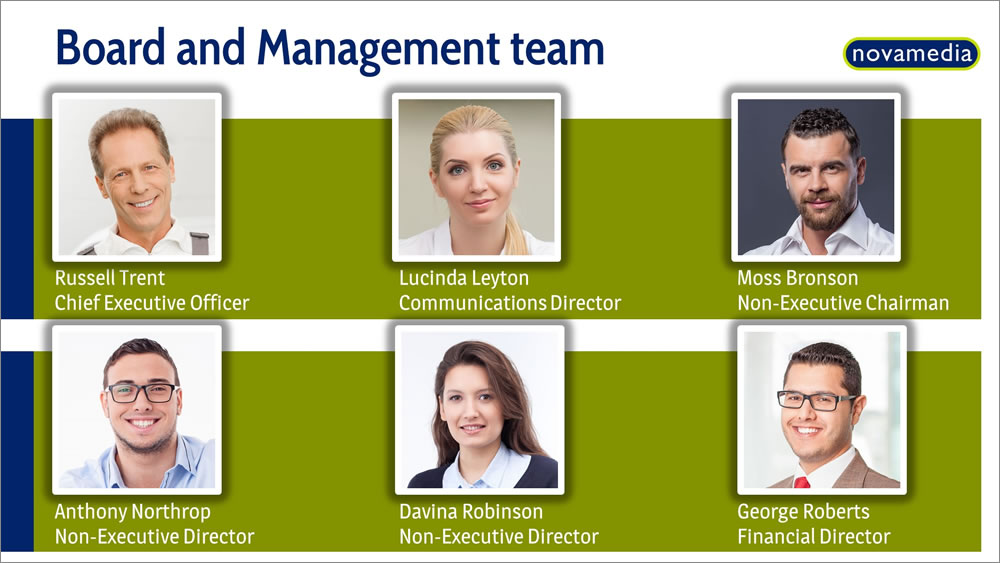 On each team picture on this slide, a link was added. The links went to the individual slides such as the one shown below.

Then the large picture on the individual slide acted as a link back to the overall team slide.

Add in PowerPoint’s morph transition and the slides really came to life acting as a bridge between the overall team slide and the individual slides. The video below shows the slides in action.

So if you want to create PowerPoint slides that bring your presentation to life, it is worth adding in some expert design.