This slide is pants, isn’t it? 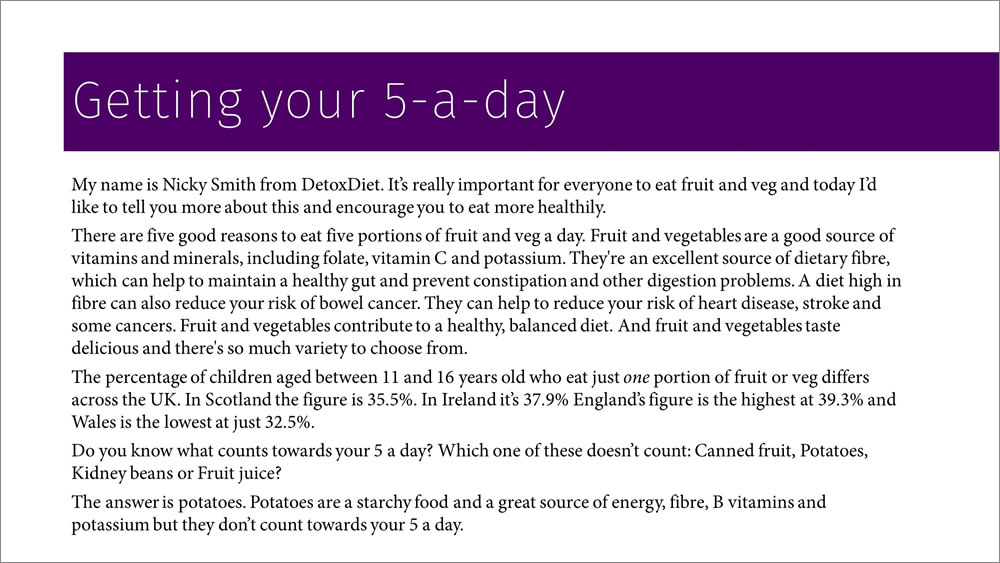 What do you think of this slide? If you’ve read my posts (or better still my book) you’ll know that two things I rail against constantly are complexity and too much text. This slide breaks both of those rules so it’s rubbish isn’t it? Well, actually…

It all depends on the context.

When I am talking about simplicity and aiming towards zero bullet points, I am referring to using slides in a speech or presentation to an audience, one in which you are talking and they are listening. Maybe a 10-, 20- or 30-minute talk, where you have a limited amount of time to get your message across in the most effective and engaging way possible.

The slide above is one that I use – yes, really! And do you want to know what other golden rule I broke with this slide? I read the text to the audience. Yes, really again!

But as I said, it’s all about context so let me explain why this slide is not pants.

This slide was used in a workshop in which I was getting delegates to design a presentation on paper. This was the script of that presentation. The delegates were given sheets of paper with blank slide frames and a bunch of coloured pencils and asked to design a set of slides on paper in 20 minutes. I read the script to them from the slide so that it was clear what it was all about. I was also able to vocally emphasise those parts of the script that I thought were important to help give them clues when designing the slides.

For that 20 minutes this slide remained on the screen so that they could refer back to it or so that I could point out parts of the script should any of them need help.

It was a completely different environment from the half-hour talk in which you’ve got to get your important message across. If this slide was used in that situation then it would indeed be pants.